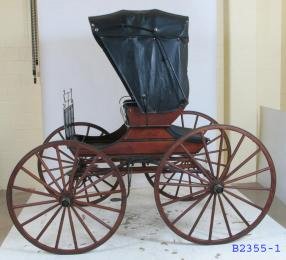 This type of buggy was very popular in both America and Australia during the mid-nineteenth century. This one was built in the Victorian town of Horsham by coachbuilder Arthur Wynne between about 1914 and 1925. It was a low cost, stylish and versatile alternative to the expensive and cumbersome English carriages of the time. Lightly constructed of strong, resilient and flexible timbers such as hickory, the buggy was well suited to rough colonial Australian roads and could be easily righted if it overturned. It is fitted with a hood and a dashboard to protect the driver and passenger from dust and mud.
From the 1920s the influx of cheap, mass-produced Model T Fords hastened the demise of horse-drawn buggies. However, they remained in use, particularly in country areas, until the 1940s.

The Abbot buggy was originally designed in America in 1813 by Lewis Downing of Concord, New Hampshire. In 1828 Downing was joined in business by Joseph Stephens Abbot. Their heavy Abbot-Downing coaches became famous, being used by companies such as Wells Fargo in America and Cobb & Co. in Australia. In Australia their light vehicles were known as Abbot buggies, from the name of the company rather than the name of the designer. It is claimed that the first Australian buggy of this type was made by Thomas Craine in Melbourne in 1854.  The Abbot buggy continued to be made until the 1920s. It eventually came in several variations: with and without a hood, single and double seats, and with various patented foldaway seats, also called jump seats.

Production Notes include information about the design, manufacture and marketing of an object. Production notes

The design of the Abbot buggy originated in America in 1813 when Lewis Downing of Concord, New Hampshire, began building a type of lightweight Pleasure Wagon. Pleasure Wagons were small versions of German-style wagons, built especially for New England farmers to go on Sunday outings. Downing made the body of his wagon even smaller and lighter then the Pleasure Wagon, with low sides that swept up at the ends. The seat was mounted on a basic wooden and steel frame, similar to the Pleasure Wagon, but the under-carriage was Downing’s innovation: he fitted semi-elliptical side springs which were less bouncy than the full elliptical ones. Downing took on Joseph Stephens Abbot as a partner in 1828; the company became known as Abbot Downing, and the name Abbot came into general use in Australia in reference to the buggy.

This buggy was built at Horsham, Victoria, by Arthur Wynne, who had been born at Tatyoon, Victoria, in 1871. After leaving school he served his apprenticeship with a coachbuilder in Donald and in 1901 he went into partnership with a Mr Scott of Murtoa, Victoria, under the name of Wynne & Scott. Arthur Wynne moved his family to Horsham in 1914 and established his own coach building business, A. Wynne, in a former jam factory at 100 Wilson Street. Arthur Wynne himself was the body builder and wheelwright and he employed a blacksmith and a painter and upholsterer to finish his vehicles. Abbott buggies built by Wynne were generally finished in bottle green with a great deal of lining called ‘Yankee’ lining.

The firm became A. Wynne & Son after Arthur Robert Wynne joined the business as an upholsterer in 1925. He was followed in 1931 by another son, Leslie Alfred Wynne, who was a painter.

The old jam factory building was replaced in 1934 with a new brick one and Arthur Wynne retired. He died in 1944 and the business was carried on by his sons until 1954, when it was purchased by Ranley Panels Ltd.

Information provided by R.A. Wynne of Horsham, grandson of Arthur Wynne, in 1981.

History Notes include facts about what has happened to an object since manufacture. This could include who owned it and how it was used (provenance). It may also describe any cultural meanings with which it may have become associated. History notes

Nothing is known about the history and use of this Abbot buggy.